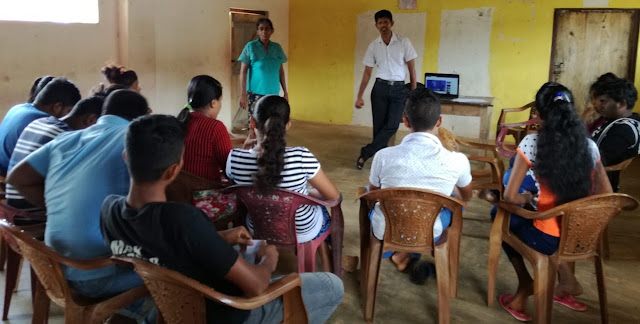 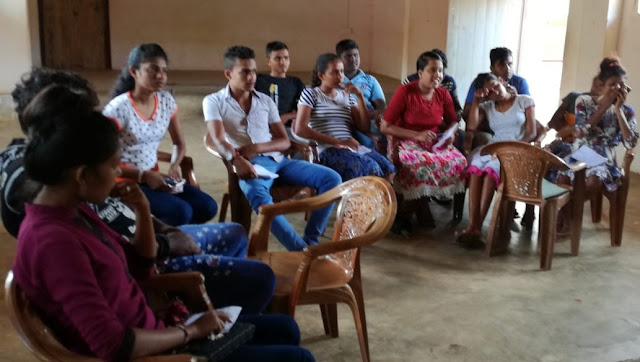 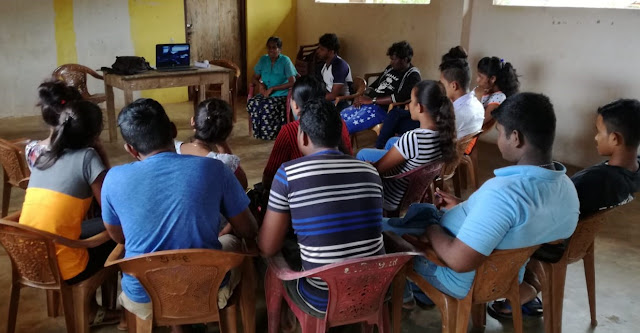 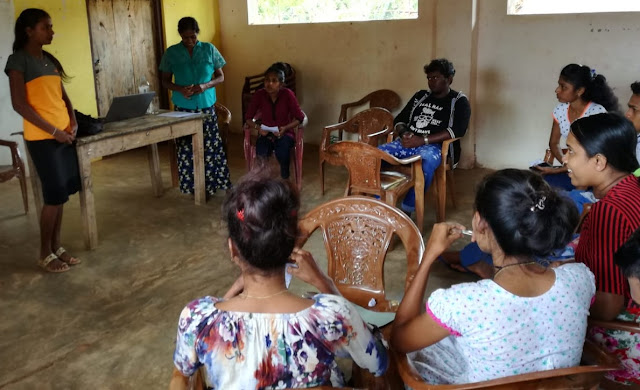 The National Fisheries Solidarity Movement meeting of youth group of Kaluwaragaswawa NAFSO was held on the 15th January 2019. At the meeting role of the youth social, economic, environmental issues that impact that youth was discussed the responsibility of youth the improvement of society was also discussed. Grama Niladari  of 635, Palugassegama, Mr. Edirisingha, NAFSO Youth Coordinator, Mr. Laksiri Fernando, Kalauwaragaswawa district coordinator participated for this program

https://youtu.be/2wXPgrSoAis
Posted by NAFSO at 00:16 No comments:

We, NAFSO send our Warm Greetings to Sampath and his Family for their settlement at Newly built Home at Neela Bamma.

Last May[2016 May] there was a flood at Neelabamma and more than 20 people lost their homes in the lower areas of Neela Bamma scheme.
NAFSO selected one family of A. Sampath's and decided to help to build a house.
Yves Bowie's family of Swiss and also Kamanie Adihetty of Canada,  Rev. Bandiwewe Diyasena Thero at Kandakuliya and with the personal support of the NAFSO Convener, the house was constructed at Neelabamma scheme.
The Divisional Secretary and the Saliyawewa Grama Sevaka mediated on many ways issuing permits on time and to get materials such as Sand, wood and other basic needs to house constructions.
On 27th July, Sampath and family settled at his home and the GS of Saliyawewa celebrated the opening of the house with cutting a ribbon on the auspicious time.
NAFSO thank all of the supporters and well wishers who helped to construct Sampath's home. 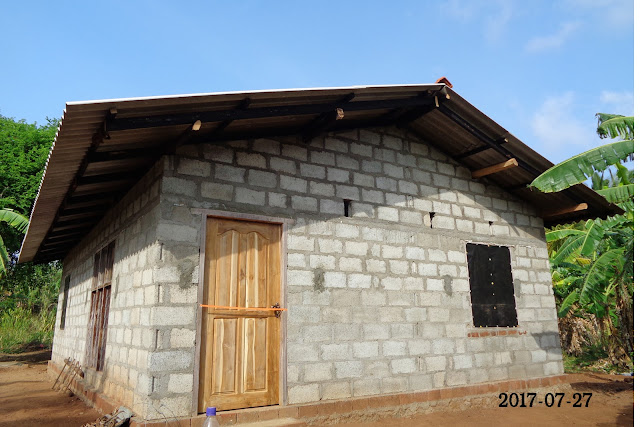 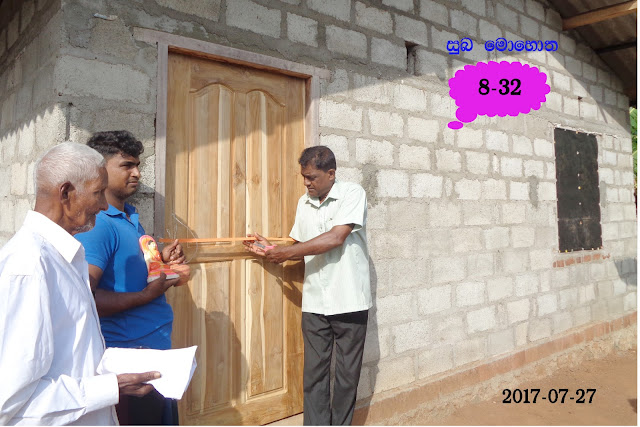 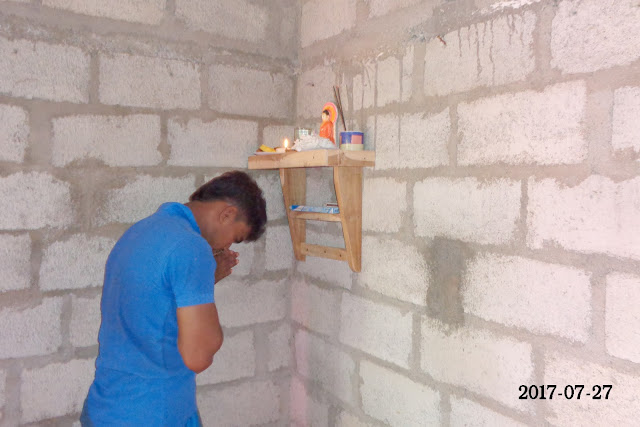 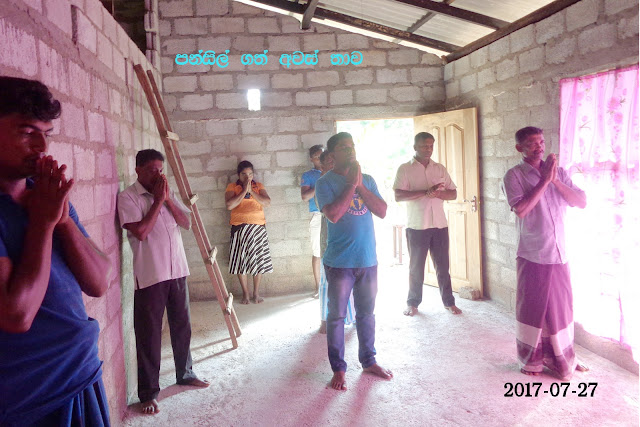 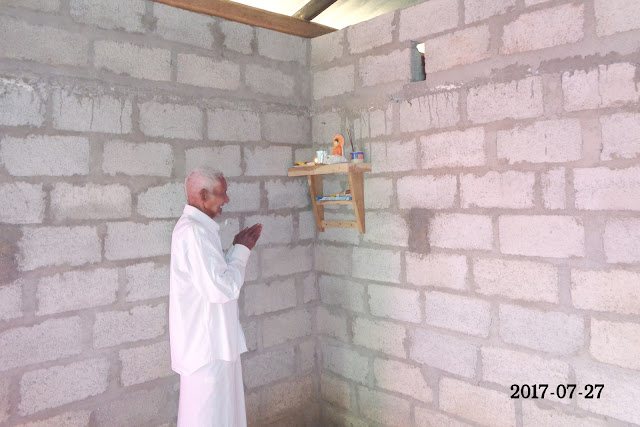 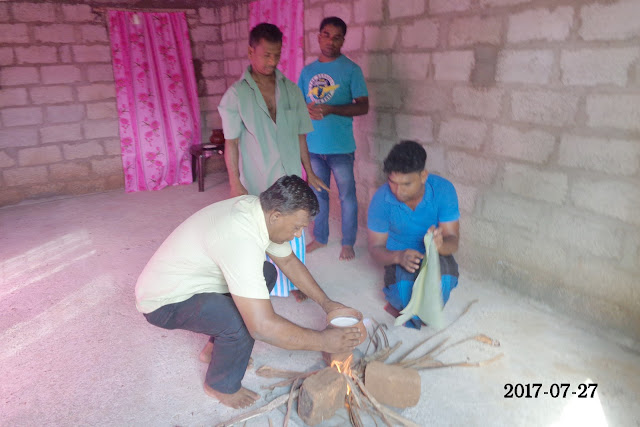 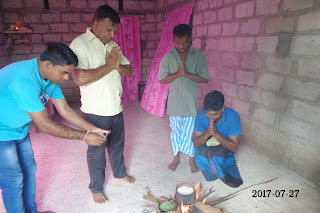 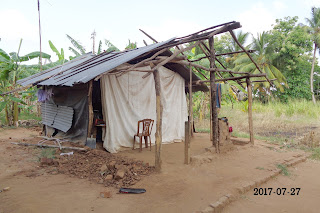 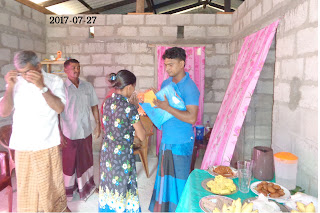 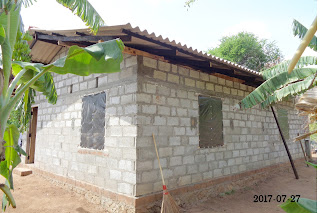 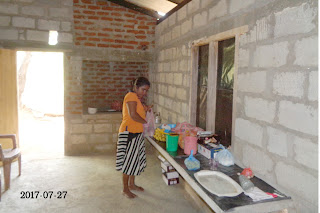 Neelabamma blue green garden resurrected after years of dormant  period. Neelabamma land was used for model farm and as a training facility on organic farming for about 5 years.
In 2015, NAFSO gave it new energy and now it is ready to show greenness  once again. 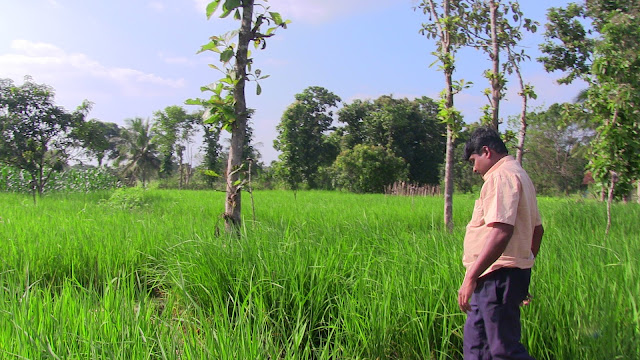 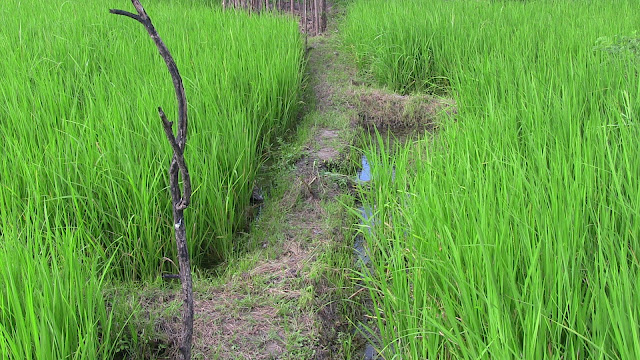 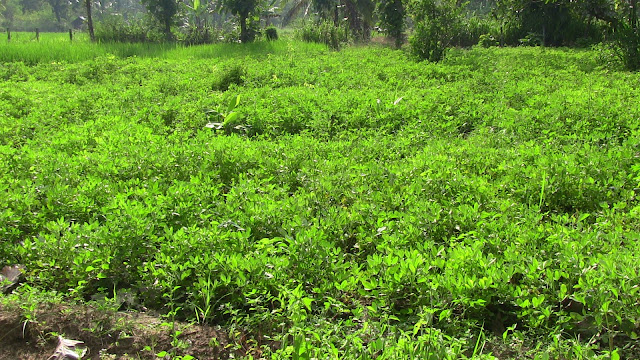 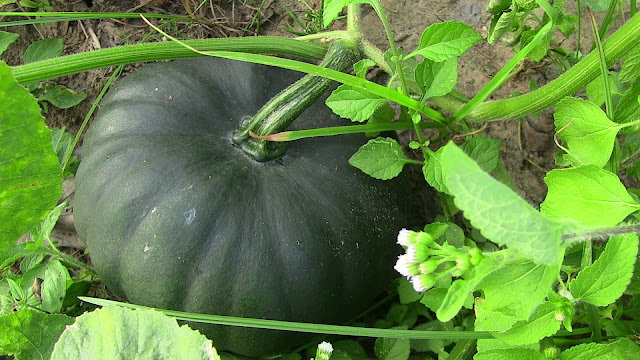 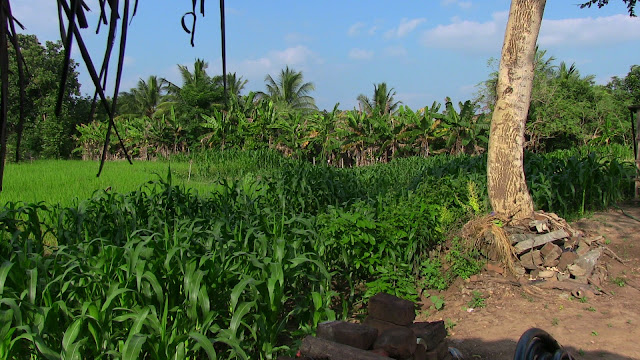 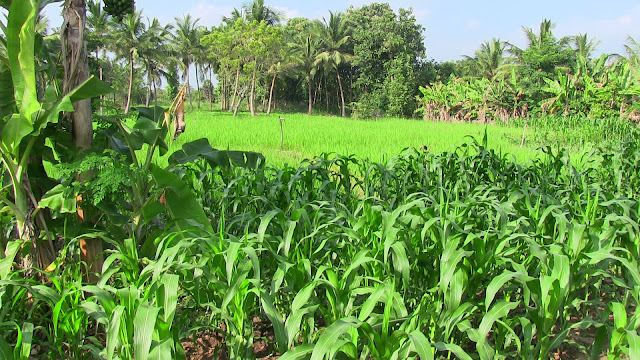 Inland fisheries sector serves as main protein provider to countryside communities of the country as marine  fish production not reaching to deep n to the country except in main and minor town areas.
Following report on Inland fisheries shows how it developed and the importance of it. 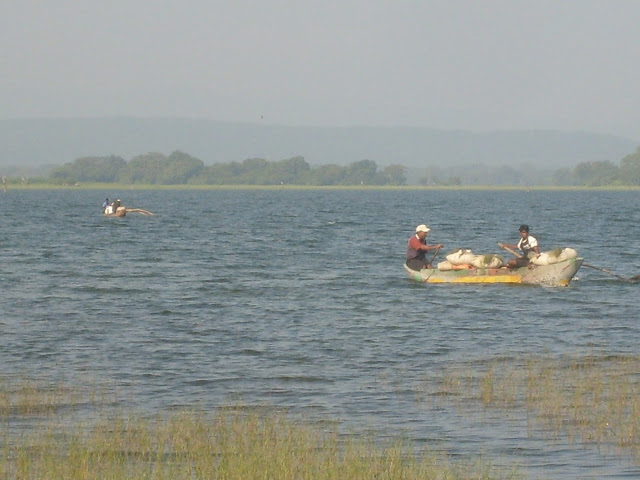 Sri Lanka holds a very prominent place in regard to inland fisheries worldwide. It has the richest reservoir fishery in the world in terms of productivity. The average productivity of Sri Lankan reservoirs is over 300 kg per hectare.
Up to the 1950s, inland fisheries were non-existent as a commercial enterprise. This changed dramatically when an African fish, well adapted to living in lakes and reservoirs was introduced to the country. Sri Lanka has the highest density of reservoirs (man-made lakes) in the world, but not a single natural lake. The closest, one gets to lakes are the villus or flood plain lakes, in the lower reaches of rivers.
Very soon after the African fish named Tilapia was introduced to Sri Lanka in 1952, fish catches that were negligible in reservoirs, increased dramatically, especially in the shallow, larger ones. The annual fish catch in reservoirs, which was around 400 tons in the mid-fifties increased to 4000 tons in the mid-sixties, 13,000 tons in the mid-seventies, 33,000 tons in the mid-eighties and 40,000 tons in 1989.
Tilapias were spread around the world beginning in the 1950s. The reason for this was their high production, and their good taste and keeping qualities. At first, there was suspicion about these fishes. In Sri Lanka they were referred to as “Japan Korali”, large but not very desirable as fish. Soon this changed, and people began eating tilapia. This fish was very cheap at the start in Sri Lanka. In 1965, when one of us (CHF) was a fishery research officer, in Polonnaruwa where a large ancient reservoir, Parakrama Samudra was present, tilapias were sold for Rs. 0.20 per kilo. Today the retail price is about Rs. 90 per kilo or 450 times the 1960s’ price. In fact immediately after the tsunami disaster when the marine fish supply declined sharply tilapia prices went up to Rs. 130 per kilo. Of course there has been considerable inflation during the intervening period but in spite of this, it is clear that tilapias are now accepted on par with some popular marine fishes.


The introduction of tilapias has been a success story, as far as reservoir fisheries are concerned. However, the culture of freshwater fishes has been an unmitigated failure in Sri Lanka. There are two main reasons for this situation. Carp culture was encouraged from the 1940s and many scientists and technicians were trained for this work.


The switch to tilapia culture was delayed or was too slow in Sri Lanka. Hare-brained schemes to culture sturgeon on the advice of Russian experts failed, predictably. Attempts to set up a fish meal industry based on large quantities of indigenous carps have not materialized. The main reason why tilapia culture is not thriving now is because the reservoir caught tilapias are so cheap compared to what it would cost to produce cultured tilapias. Tilapias unlike carps are traded widely internationally. The USA is the major importer of tilapias, importing 93,000 tons in 2003.
The only way at present that tilapias can be cultured in Sri Lanka and sold at a profit is to export to foreign markets in Europe, North America and perhaps Japan.


The future of fisheries


During the past fifty or sixty years the most profitable marine fish stocks like tuna, cod and herring have been systematically over-fished and many fisheries have closed temporarily or collapsed. Efforts mediated by the United Nations have attempted to conserve fish stocks so that they would be sustainable. However, these efforts are perhaps too little too late. Marine fisheries were thought to be inexhaustible, because of the vast extent of the oceans, the vast stocks of fish and the difficulties of harvesting.


These predictions were proved wrong and most important fish stocks are now in decline or have collapsed. High catches have been maintained by switching to other stocks and more intensive fishing. However, this cannot go on for very long.
One alternative used by humans over millennia has been to domesticate and culture plants and animals. This gives more sustainable and higher yields (e.g. cattle, chickens, tilapias and some other fishes, potatoes). The productivity of tilapias especially, is very high (600-800 kilos per hectare per year). It is estimated by the FAO, that by 2030 the production from aquaculture in the world will be around 117 million tons per annum. In other words the production from aquaculture worldwide will be more than the present total fish catch in the world, which is about 100 million tons annually and comes mainly from marine fisheries. With the increase in standards of living and the population, the demand for fish in 2030 in the world would have risen considerably, while the marine fish production would probably have declined from over-fishing from the present figure of about 100 million tons annually.
It is important that Sri Lanka develops fish culture if it is to be competitive with the rest of the world in fish production. Sri Lanka possesses around 14,000 large and small reservoirs including seasonal reservoirs with a total extent of 260,000 ha. The large reservoirs could be used for cage culture of tilapias and the small reservoirs including seasonal reservoirs for extensive and intensive culture, besides culturing fishes in ponds. Much research and investment of funds will be necessary to have a successful and highly productive fish culture.
Tilapia culture may prove a boon to the country but this will depend on many factors including political decisions.
By C. Fernando and A. Hettiarachchi
(C.H. Fernando is attached to the Department of Biology, University of Waterloo, Waterloo, Ontario, Canada and A. Hettiarachchi to the Ministry of Fisheries and Aquatic Resources, Sri Lanka)
Posted by NAFSO at 22:13 No comments: